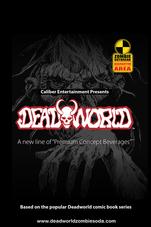 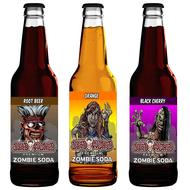 Deadworld Zombie Soda was launched in the 1st Qtr 2015 and is slowly infecting its way across the United States retail scene.  Retailers that have begun to offer the product inform us the drinks are outselling well known national brands. Targeted at the core 14-40 year old consumer Deadworld bottled beverages hit a large niche market with individuals keeping the bottles as souvenirs because they not seen anything like it in stores before but that they are also big zombie and horror fans.

In the past we've created 2oz Deadworld Potato Chips available in Original and BBQ flavors.

"Deadworld - Quite possibly the Best Zombie Comic Ever." - Horror News

"Deadworld is the grand-daddy of zombie comics!" - The Pop Culture Network

"...amongst the most essential horror titles of the last twenty years" - For the Tomb Magazine

"The best, in my humble opinion, of the zombie comics." - Tom Snigoski, Buffy the Vampire Slayer

WHAT IS DEADWORLD ZOMBIE SODA?

Deadworld Zombie Soda is a premium beverage line conceived and marketed by Caliber Entertainment LLC based in Michigan.

Currently the Deadworld Zombie Soda beverages are available in 6 flavors. What makes the zombie sodas unique is our partnership with various comic book artists who have provided their own creative spin to the bottle labels with depictions of various zombie images. Primarily based on the characters and events that take place in Deadworld comic book universe.

Deadworld is the award winning, long running cult hit comic book series published by Caliber Comics that first exploded on the comic scene in 1986. With over 1 million copies in print and over 100 comics & graphic novels released to date, Deadworld is not your typical "zombie comic book or story".

A supernatural plague has been unleashed on the world. The dead return to walk the earth...but this is no standard zombie story.  The dead are just foot soldiers for those who have crossed the ‘Gateway’ from another dimension. There are leader zombies who are intelligent, sadistic, and in addition to having a hankering for flesh, enjoy the tortuous ordeals they put the surviving humans through.

Overall leader of the zombies is the intelligent, Harley-riding, chain-smoking sarcastic being known as King Zombie. Killing humans is just a sideline passion to his cruel methods as he seeks to find a way to open the ‘Gateway’ permanently and take over the Earth under his rule. Deadworld is a critically acclaimed action driven horror comic series that attacks the zombie menace from a different ‘supernatural’ perspective. In addition to having intelligent zombies with a mission and goal, Deadworld also explores the human interactions as mankind finds itself facing extinction. And while some groups organize in the best interests of self-preservation, others use this as an opportunity to explore their own self-deluded dreams.

Deadworld is a story of horror...of survival...of hope and despair. It is an ongoing saga of modern man facing his darkest side...where science and technology are no longer his allies...where his power of reasoning is no longer his weapon alone. Deadworld is death, yet life.